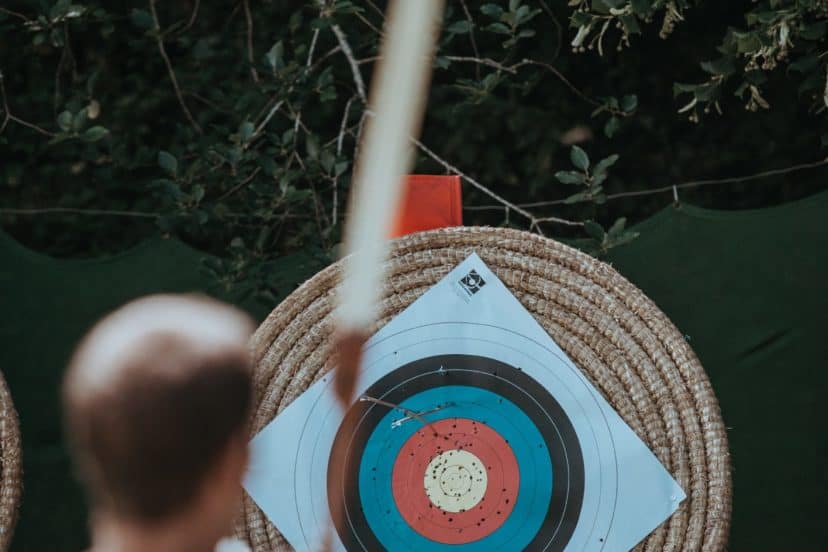 In this Archery summary, we’ll talk about how it’s assumed that archery is just the sport of using a bow and arrow to shoot at a target. However, archery consists of more than just bows and arrows. As there are several different types of archery, some of which are better suited for beginners and some are great for hunting. One thing to also know is that when you first start out, you are using muscles that you have not used before. The archery muscles will grow stronger over time. The more you practice archery, the better the muscle will develop.

However, when you first start out, remember safety first, and watch your form so you don’t end up hurting your shoulders when you shoot. If you think you’re ready to buy a bow and arrows but are unsure of what kind to try, then let’s do a summary of the different types of archery.

Bow hunting is similar to firearm hunting, but instead of a rifle, you use a bow. Bow hunters usually find a spot in the woods, set up camp, and wait for prey to walk into sight. This type of archery takes quite a bit of patience, persistence, and the ability to remain silent, as to not scare your prey. In most cases, the prey include deer, elk, boar, moose, turkeys and even little rabbits.

Bow hunting requires different skills from the traditional rifle style hunting. For one thing, the archer needs to have  speed. There may be times where the archer needs to reload the bow quickly in order to take down the prey . There are also  positions that other archers will not be in, for example shooting from a hide, tree stand or in a crouching position. Remember this hunter is hiding until their prey come into view.

Bow hunters can also hunt fish in the water. It’s the combination of spearfishing and archery, all rolled into one. This is actually called  Bow Fishing.

Usually bow hunters use a compound or recurve bow, and broad head arrows.

When most people think of archery, this is what technique comes to mind, the target with the bulls eye. Target archery is beginner friendly and great for all ages. Some children learn while attending summer camp. Target archery can be performed indoors and outdoors. 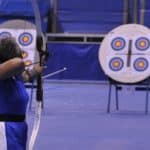 However, when done indoors, the targets are usually about 19 yards away.

Where as outdoors, the more space you have the further away your target can be. If in a competition, the target may be around 77 yards away, as the furthest distance. It involves placing stagnant targets short distances away and practicing shooting. Typically, beginners start with target archery, because it’s an accessible form of the sport. There are competitions for target archery in all skill, and age levels.

Target archery is also performed at the Olympic games. In the Olympic archery, the archer typically uses a re-curve bow, along with accessories like sights, stabilizers and clickers. The target is also placed about 77 yards away with a face of 48 inches in diameter.

Target archery may involve just about any bow. The most popular styles used are the compound and recurve.

Field archery is categorized as an advanced form of target archery.  However, instead of setting up targets in a field, the targets are placed along a course in the woods. The archer then walks along the course, shooting targets along the way. This is considered a more challenging form of archery, because the targets can be up or down a hill, behind obstacles or positioned at an angle and vary in size and shapes. 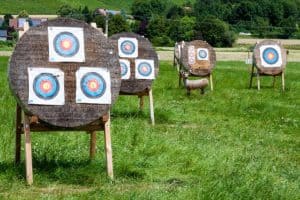 Unlike target archery, the archer does not have an exact idea of how far the target is. The target distance is not posted to add to the challenge. The archer has to judge for themselves on how far the target might be. Field archery lets the archer test their skills by having a variety of shots and distances.

Field archery can be done in competitions as individuals, or as teams. When performing in teams, each member usually uses a different style of bow, such as one will use a recurve and the other a compound bow.

This can be done with any type of bow,  but the compound and recurve are used most often.

If you want to take the next step into archery, then 3D Archery is what you are looking for. 3D targets, primarily consist of animal-shapes, that are placed along the course giving you that life like hunting experience. As you walk, you will be shooting at the fake animal targets for practice. They can be located in any area, just as the animal would be in the real world, or spread out in a pasture for target practice.

This is considered an ideal style for those interested in bow hunting. It helps you get the experience before you actual go out to the forest. The 3D targets have a circle aligned area that are positioned where you would hit the animal, in order to take it down. And, with this circle area, it has a point system which is useful in competitions.

The typical bows that are used for 3D archery are the compound and the recurve bow. However, some archers prefer the feel of a longbow, as well.

Clout archery differs from field archery. Due to the placement of the target, there is a focus on distance. In Clout archery, the bullseye is laid flat against the ground. This style allows you to practice arcing the arrow, as you shoot high and hit a stationary target.

The closer the archer is to the clout / flag, the higher the points the archer gets. This type of archery requires more space. Due to being able to allow for overshooting of the arrow, and because of this, the flags are also placed further apart than your traditional archery targets.

The recurve bow is most commonly used for this method.

If your are looking for archery at a distance, then Flight Archery is for you. The central goal is to place the target as far away as possible, and still hit it.  In this form of archery, the arrow is shot up high trying to get the arrow to go as far as it can. The further, the better.

The archer usually performs this from a standing position, but there are times it is done in the foot, bow position. This is when the archer is in a seated position, and uses their feet to push the bow forward, and their hands to pull back the bowstrings.

Flight archery is  considered a great form of archery for overall accuracy improvement.

A specialized flight bow is usually used in flight archery. But don’t worry if you don’t have one! A typical recurve bow may also do the job.

Used with a traditional bow, without the help of modern technology. This type of archery is all about getting to the basics. The archer, the bow, and your target. With traditional archery, it has a cross style of bow hunting and target archery.

The primary difference is how you use the traditional bow, along with the lack of assistance, such as a stabilizers, or anything else.

In run archery, the archer goes though a course racing to hit as may targets as they can. It does not have to be a dead center hit just as long as the archer does not miss. In a competition, if you miss, you will have to do what is called a penalty loop.

Typically, the bows are held in one hand and the arrows are either left on the sideline or or worn on their backs. The run can be on a flat open course, or in the woods, that is good for a run without getting hurt. The first archer to cross the finish line wins the race.

You can use any kind of bow to perform archery. And, some bows are better for different types of archery. So, if you are thinking of archery as a hobby or sport, pick up a bow, and find your target, then learn which type of archery you want to do. 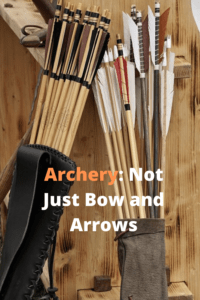