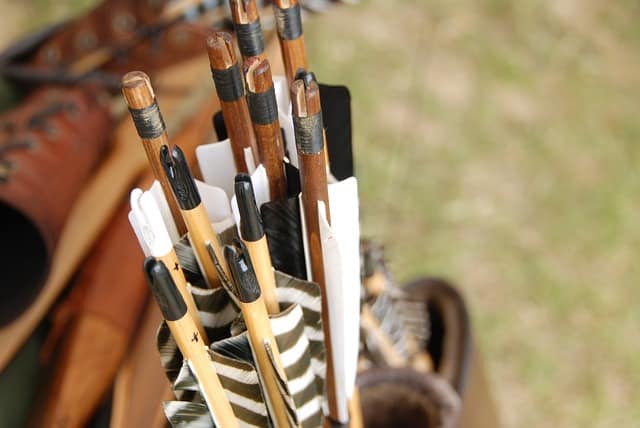 What could be more exciting than finding an arrowhead?  This shows that archery has been around for centuries. But what exactly does finding an stone arrow heads mean? What is the history of archery? It shows that in Africa the bow was developed there perhaps as early as 50,000 BC.  It also shows that this is not a new concept and has actually been the exact same with the way the archer uses a bow. The archer transfers his muscle energy into the bow with the string and then the bowstring passes on the power to the arrow at an incredible speed.

The bow has been a popular weapon in warfare for thousands of years. An example is Egyptians using the bow versus the Persians 5,000 BC.

When looking history, we see archers who were a valuable possession for many Kings, a example of that is James II, King of England who stated that football and golf took up too much time from archery practice and for that reason must be prohibited!

Archery has a long history as a sport, and the Scottish club Kilwinning Archers was formed in 1483 making them oldest sports clubs on the planet. When looking back at the Olympics Archery was an event at the Olympic Games in 1900, 1904, 1908 and 1920. The International Archery Federation– FITA was founded in 1931 and the very first World Champions took place the same year. Throughout the 1940s international archery began to grow. Archery made history in being the first sport to allow women to compete the 1904 Games.

Archery is practiced in many different ways, the most common next to Target Archery is Field Archery and 3-D Archery. Flight shooting is another type of archery and it exits on shooting an arrow as long as possible. Trying to see how far each shot lands. The arrows are usually shot in an upward direction trying to give more flight which could lead to greater distance. They are not focused on trying to hit a target. A more uncommon style of the sport is Clout Archery. The target is on the ground and the range is 165 meters for men and 125 meters for women.

There are several ways to enjoy the sport of archery in modern times. But if you look back in history it started out as something of necessity, for either food gathering or warfare. For example, the first combat was in 2340BC by the Babylonians.

The history of archery has evolved from prehistoric times, when the bow was used for principal weapon of war and hunting throughout the world to now being a well know form recreational archery. Hunting is still a large part of archery but it is no longer used for war. With all of the changes over the years archery safety it is still three times safer than golf. The record shows that there is one injury for every 2,000 participants.

Image by Zeljko Vranjevac from Pixabay

Here are 3 top archery companies- Do you know them? These companies have been in business…