What is Olympic Archery? We know that archery is one of humanity’s most ancient skills that was originally used for hunting and survival, but which today, is mostly practiced as a sport. But did you know that archery was introduced to the Olympic line up at the turn of the 20th Century, in 1900. However, between 1920 and 1972 archery was left out of the Olympics, but after it was reintroduced 1972 it rapidly became more popular than ever.

Over the last 120 years more than 80 countries have competed in the archery events, with France being the most regular participant. Since 1972 when archery was reintroduced to the games’ lineup, South Korea has led the world and won the most Gold medals, having won 39 to date, followed by the United States with an impressive 16 Golds and Italy with 7.

Types of Archery Events at the Olympics

Archery takes place in the Summer Olympics, as opposed to the Winter Games, which is overseen by the World Archery Federation. It’s their job to manage the events, determine the conditions for competition and register athletes’ rankings, not only at the games but also throughout the year.

Up until 2016 there were 4 archery events that were staged at the Olympics, that included an individual competition for men and women as well a team event for men and women. However, with the growing popularity of the sport in the next Olympic games, a new event is being added which is a mixed team event.

All archery events at the Olympics are competed at from a distance of 70 meters and with the target only measuring 1.22 meters, this is a tough challenge and is exciting for the audiences that watch from all over the world.

Is there an age limit for competing in archery at the Olympics?

There is a lower age limit of 16 years old that remains in place at the Olympics, however there is no upper age limit. The average age of medal winners though in Olympic archery is between 25 and 30 years!

Archery is an extremely inclusive sport which makes it popular with people throughout their life times, at any age and for all genders.

What types of Bows are used during the Olympics Archery competitions?

The competitors must all use Recurve bows at the Olympics however there are plans to introduce a new event that would be exclusively for compound bows. Compound bows made their first appearance at the Pan-American Games in 2019, which is also overseen by the World Archery Federation.

It is expected that within the foreseeable future compound bows will become a standard part of the Olympic Archery competitions, albeit in a separate category to the more traditional recurve bows.

How do people qualify for the Olympic Games Archery Events?

Qualification for the Olympics is extremely difficult and only the best athletes in the world who have trained for years can achieve the high standards required, and archery is no exception.

To qualify for the archery events participant must achieve a Minimum Qualification Score, also known as MQS, which is:

Each archer is allowed 20 seconds to fire one shot, which they do alternately with other competitors using a 1.22 meter target with ten consecutive circles within it, that has the highest score of 10 in the center.

During the summer Olympics 64 male and 64 female archers represent their countries in the singles events, with each archer having a total of 72 arrows which are fired in groups of 12. They are then ranked and move on to an elimination round after which the archer with the highest overall score takes home the Gold medal.

What accessories do Olympic Archers use at the Olympics?

As well as their recurve bows, of course, Olympic archers use a variety of accessories that are just as vital for their performance, accuracy and comfort. 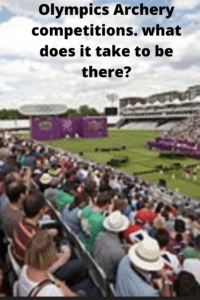 These are the main items that you need for archery. Most equipment is extremely well made and will last you for a long time.

Archery at the Olympics – the world’s most celebrated festival of sport.

Since its return to the fantastic stage of the Olympics in 1972, the profile of archery has been increasing with each year that goes by. People all over the world are inspired by the achievements of the Olympic archers, both individually and in their team events, making the summer games the perfect showcase for the sport and its competitors.

Image by Kevin Phillips from Pixabay