Archery is a sport that involves shooting arrows from a bow at a target. The individual scores are added up throughout the game and the archer with the highest score wins the competition. Do I know what the two different types of archery there are?

There are two main types of archery

Here are the two types: Target Archery and Field Archery

Participants in Field Archery use bows to fire their arrows at the targets. The bows can be made from a number of materials including traditional wooden bows and the more modern fiberglass and carbon bows. Bows are fitted with stabilizers and sights to aid the archer maintain higher levels of accuracy and consistency. Arrows are tipped with metal points and a furrow at the back to fix the arrow to the drawstring.

Types of Target and their Specifications

There are two types of archery target; indoor and outdoor types. The diameter of the standard outdoor targets are either 122cm or 80cm and have 5 concentric rings which are colored, from the center, gold, red, blue, black and white. Within each concentric ring there are two separately scored rings, with the highest scoring rings always being towards the center. At the very middle of the target is the bullseye, often known as the pinhole, for which the archer gets 10 points for a hit. The center is also marked with a tiny black cross. Each ring going out from the center scores one less point until in the outer right the arrow would score 1 point. 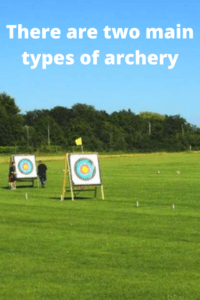 The center yellow rings of the 122cm and the 80cm targets are, respectively, 24.4cm and 16cm with the pinhole being 12.2cm and 8cm. The lines that divide the separate scoring zones should not be more than 2mm wide. If an arrow hits the dividing line between two scoring zones that arrow will be scored at the value of the higher of the two zones.

The archery targets should be set up at one end of the ground with the faces of the targets angled upwards at approximately 15 Degrees. This ensures that the arrows are more likely to stay in place once they strike the target. The pinhole of the target should be 130+5 cm above the ground. Each target should be visibly numbered and in exact line with the shooting position of the archer at the firing line.
The shooting position can be marked with discs or flat markers and should be placed at the proper distance from the target. A waiting line should be painted or marked out 5 yards behind the firing line where the archers must wait until told to step forward to the firing line in preparation to shoot.

The shooting area should be cordoned off to let people know that they cannot enter. This is done for both safety reasons and also so that the archers are not disturbed while shooting.

Archery – a popular sport all over the world. Having universal rules for archery is important because it means that it can done all over the world on a fair playing field. Archery is a fast-growing sport and with the rules of the game being very easy to pick up it’s a fantastic hobby to take up providing you with gentle exercise, a fun sociable environment and an enjoyable new challenge.