Have you ever thought about getting into archery competitions? Do you know the different types of competitions? These competitions are a fun, and sociable  a great way to test your skills. This opportunity to compete against others, and push yourself to be the very best you can be. It’s a fantastic way to meet fellow archers, and enjoy the community spirit of archery clubs and teams while taking part in exciting events both locally and far and wide!

What kinds of competitions are there in Archery?

There are many different types of competitions within the archery community that are designed for all skill levels and abilities, from absolute beginners, right up to the World Championships and the Olympics! Competitions are held both indoors and outdoors, with a variety of different rules. However, no matter what kind you compete in you will find the atmosphere is friendly, with excellent sportsmanship on display at all times! The archery community has great comradery and you will always be congratulated if you do well, and if you are having a rough day, you will find support from your fellow competitors!

The 1440 Round is called this because the maximum possible score is 1440. A 1.22-meter target is used, and the archers shoot a total of 36 arrows each. Men shoot from a distance of either 90, 70, 50 or 30 meters. Women shoot from slightly closer, at ranges of 70, 60, 50 or 30 meters. This type of ‘round’, or competition, is often referred to as the FITA round because FITA (Federation Internationale de Tir a l’Arc) is the sports over all world governing body.

This is similar to the 1440 except the archers shoot a total of 30 arrows each and the maximum possible score is 900. In this form of competition men and women fire from the same distances; 60, 50 and 40 meters at a target that is 1.22 meters wide.

Indoor archery is more restrictive in terms of distance than the outdoor competitions, however it is still exciting because at closer ranges the accuracy of the competitors can often be a lot closer to one another!

Indoor archery competitions are usually fired from a distance of either 18 or 25 meters. 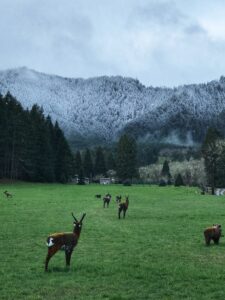 3D archery competitions are a relatively new addition to the competitive circuit of archery, with targets that are made to imitate the size and look of real animals that are hunted with bows. Targets will often be deer, turkeys and rabbits. Other targets may be used as well, and the distances at which competitors shoot varies a lot. In some cases, these competitions will be held in wooded areas to make the environment more realistic.

Field archery is a very traditional form of archery competition and is conducted in rural areas with the targets placed along a path. Archers have to shoot both up and down hill which adds considerably to the difficulty of these events. The distances at which the competitors must shoot vary throughout the route, with some of the distances being known to the archers while others are not, meaning that they must estimate their shots purely by sight!

This form of competition is usually held in aerodromes or other large open spaces. The rules in this type of competition are very simple, the person who can shoot their arrow the furthest distance from the starting line wins. There is no specific target to hit and the competition is only about shooting the arrow as far as you can!

This is a fun, active form of competition. The archers must cross country ski from one target to another, and then shoot at the target from that position. This form of archery is included in the Winter Olympic line up and is popular with the crowds. The competition not only tests the accuracy of the archer’s shooting skills, but it also tests their physical fitness and endurance. The winner is determined by a combination of the time in which they complete the course as well as the accuracy of their archery.

This is an extremely ancient form of archery competition where the archers must shoot their arrows and aim for a flag that is placed in the ground. The winner is the one who places their arrows nearest to the flag (the ‘clout’), with points being given for how close the arrow falls to the flag within concentric circles marked out on the ground. The origins of this competition are in Europe, during the Middle Ages, when archers would practice their skills for battle in this way. 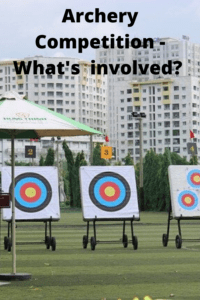 Para-archery is a competitive form of archery that is only for people with physical dis-impairments. The competitors are also allowed to use various physical aids and assistive devices to help them shoot. These events are exciting and help to break down stereotypes that can still sometimes surround people of different physical abilities.

The Summer Olympics is held every 4 years at different venues around the world. This is one of the most prestigious competitions and even to qualify is extremely difficult! In the Olympics the archers have 72 arrows which they fire at a target of 1.22 meters at a distance of 70 meters. After an initial qualifying round the archers go into a second knockout round. The winner is the archer with the highest overall score.

What type of Bows are used in archery competitions?

As a general rule, throughout most target archery at a competitive level, people use compound or recurve bows. Different competitions may specify the different types of bow that can be used though, for example, in the Olympics only recurve bows are allowed; although there are rumors that a compound bow event is going to be added to the lineup in the near future.

Every archery competition will classify what category of bow you can use. This is to keep the competition fair and allow the archers to be judged on their skill and not the bow they are using. Compound bows are far more powerful than a recurve bow and a bow with sights will be able to outperform one without sights.

In the World Championships competitors are allowed to use both recurve bows, and since 1995, compound bows as well. This exciting event is a wonderful showcase for the world’s finest archers in a wide range of categories.

When you take part in competitive archery you will meet new friends, push yourself to new levels of achievement and find inspiration from others to train harder! Whether you win or lose the events can teach you a great deal about the sport, and the feeling of satisfaction after a competition, particularly if you do well, is unbeatable!

And don’t forget, even if you are not competing, then going along to watch an archery competition to support your friends or family members, is a great way to spend a day!

Competitive archery is an important part of the sport that inspires new archers to learn more and is a strong focal point for the archery community to gather around.

Image by Trung Kien Thai from Pixabay, Photo by Laura Crowe on Unsplash