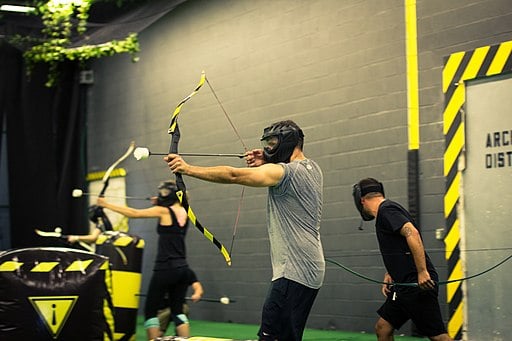 Archery combat games are an exciting development in the field of archery. It consist of a fun team sport, that has many variations. Most of the types of combat archery are similar to paintball or dodge-ball, except instead of paintball guns or balls the participants use bows and foam tipped arrows. This combat is usually played with two separate teams, in specially designed arenas. The games are fast paced, and victory relies on tactics, accuracy and teamwork.

This combat is a fun, team building game that is popular with groups of friends, families and is a favorite for corporate events planners. Combat archery is an excellent activity for bachelor and bachelorette parties, birthday parties and graduation celebrations. Or just any groups of friends large enough to divide into two groups to play against each other.

Different facilities will host their own selection of game types.  The most common forms of combat archery are listed below to give you an idea of the kind of thing you can expect!

This is one of the most exciting types of combat archery and is loosely based on the rules of the ‘first person shooter’ video games that shot to fame during the 1990s. The group is divided into two teams in an arena that has many obstacles, hide outs and walls for cover. The objective is to kill your opponents before they kill you! There are usually a predetermined number of reenter an existing game ( called respawn) allowed, 5 for example, after which you are out. The last team with members still standing wins!

This two-team game requires great tactics to win. Each team has a flag in their base, which they must protect, while also trying to capture their opponents’ flag and bring it to their base. If you are shot with an arrow, then you must return to your respawn point (usually near your own base). If you have captured the enemy’s flag and are returning with it to your base and are shot with an arrow, you must drop the flag where you are and then return to your respawn point. The winning team is the first to bring their opponents flag back to their own base.

This is a crazy free for all where everybody plays for themselves in the arena, with only one life each and no respawns! Each player tries to kill all the other players and the last person left standing is the winner of the round! You can play many rounds so that if you get hit really early on you can have another try in the next round. Alternatively, you may be allowed 2 or 3 respawns, but the rules will depend on where you are playing!

Yes, combat archery is definitely a safe sport to play. It’s essential that you wear the correct protective equipment though to make sure that you don’t sustain injuries!

What Equipment is used in Combat Archery?

Bows and Arrows-Special arrows are used that have a foam tip so unlike paintball you won’t be left with huge bruises at the end of the day! You can use your ordinary bow however many facilities will provide you with one. For combat archery a light weight, simple recurve bow is usually the best choice because you are going to be running, sliding and hiding!

What are Archery Games?

Archery games are fun, light-hearted and usual ways to practice your archery skills, and improve your overall performance. These games are not part of any serious competitions, leagues or international fixtures, but instead are played in clubs and by groups of friends just for fun! There’s a whole host of different kinds of archery games, that include, but are not limited to:

How do you Book Group Events?

Combat archery and archery games are great for bachelor and bachelorette parties, corporate team building events and for groups of friends and family to enjoy a day out!

You can easily book a group event by contacting a local company that provides these events. Many archery ranges have special days when they play archery games, while many indoor archery centers also have combat archery facilities.

You can book your group events online or by telephone, but it’s worth arranging them in advance to avoid disappointment, especially if you want a specific date!

When you do make the arrangements make sure that you have details on hand such as the number of people in the group as well as any special needs that you have! 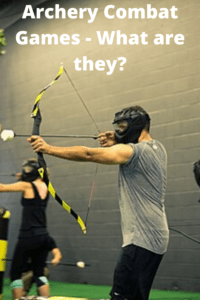